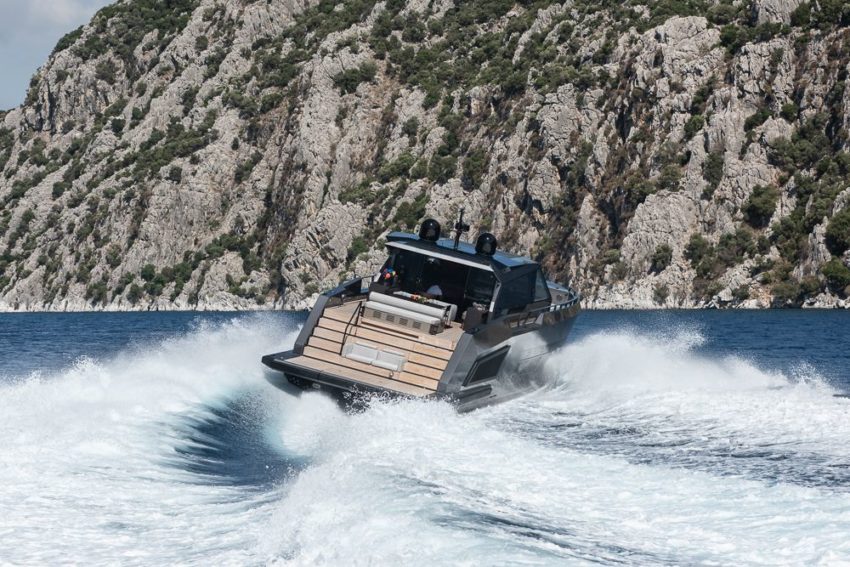 Redazione30 July 2020Comments Off on Mazu Yachts, images from the future of yachting1355 Mazu Yachts has released stunning new images of its latest 82-footer recently delivered to its owner. Powered by three Volvo Penta IPS units (1,000hp each) and built of a carbon composite in a lightweight sandwich construction for maximum rigidity and strength, the deep-V hull has a deadrise of 19 degrees in the stern and 28 degrees in the bow for a top speed of 40 knots at full load and a cruising speed of 33 knots. “The hull lines of the new Mazu 82 were designed in-house to provide a perfect balance between top speed, seakeeping capability and fuel efficiency,” says Halit Yukay, lead designer and CEO of Mazu Yachts. “At cruising speed the yacht burns around 600 litres of fuel per hour for a range of just under 400 nautical miles or around 12 hours cruising.” At 25mt overall the Mazu 82 offers a lot more volume than the yard’s previous 62-foot flagship. Logistically this was not an issue because the shipyard is able to build up to 30 metres and Yukay maintains that building smaller yachts is actually harder because of the lack of space, which slows down production as fewer people can work on board at any one time. Another advantage is that there is much more free-standing furniture on board, which was custom-designed by celebrated designer Tanju Özelgin, the first time Mazu has worked with an independent stylist. The exterior profile of the 82-footer is characterised by the flush main deck with no steps and the angular lines of the all-glass deckhouse. Wherever possible the shipyard has used one-piece glass panes, which meant increasing their thickness in accordance with class requirements. Hence the tempered and laminated windshield is over 22mm thick and with a PVB interlayer is literally bulletproof. The glass is also extra clear to eliminate distortion and reflections. Three openable ‘portholes’ at the front of the superstructure provide natural ventilation while under way. With its sliding aluminium roof, custom-made by OPAC in Italy, the main deck has an airy, loft-like feel.

On special request of the owner, Mazu modified the aft deck design to include terraced steps leading down to the swim platform. These steps function as built-in furniture so guests can sit down (they are wide enough to even lie down) and still converse with other guests.

“Multifunctional design was very important for the owner,” says Yukay. “In fact, the open foredeck has three different uses: as a sunbathing area, a dining area for 12 people, and a screen can be set up to turn it into an open-air cinema.” By all accounts the proud owner is delighted with his new acquisition and is spending most of his time on board. Given the current Covid crisis, he is also planning to use his yacht as a floating office well into the winter season.