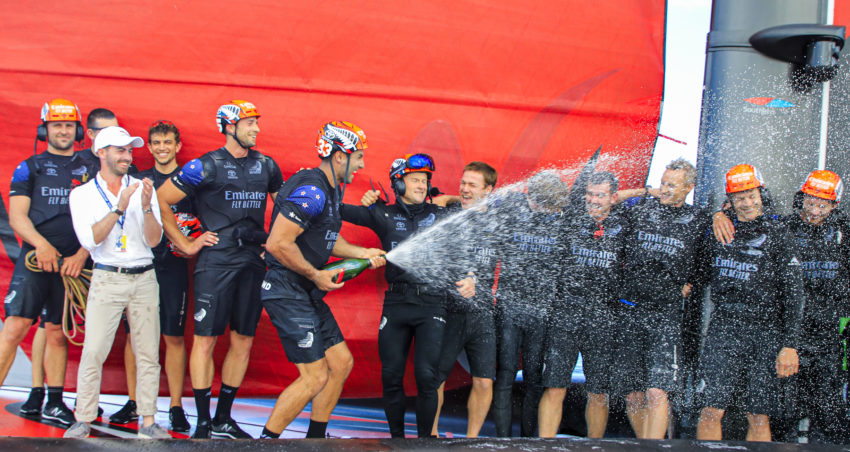 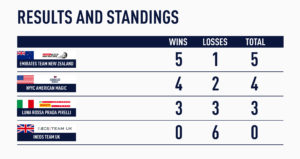 Another wonderful day in Hauraki Gulf even if the wind got crazy. But still match racing and still fighting. Each race can be “capsized”. 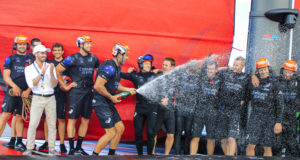 As the race boats headed out to the course there were questions about how the weather would play out. With a forecast for light breezes and the race area positioned to the leeward of Rangitoto, the concern was that the breeze would prove fickle in the lee of the island.

The pre-start saw both boats enter on time and at speed but there was no tactical engagement between the two.
Instead, as the clock counted down to the start Luna Rossa Prada Pirelli (ITA) and INEOS TEAM UK (GBR) both chose to line up on starboard for a perfectly timed start.
As the pair headed out to the left hand side of the course Luna Rossa Prada Pirelli were to windward and were inching out an advantage over INEOS TEAM UK.
The first tack came from Sir Ben Ainslie’s team, the Italians followed suit to cover them. A few minutes later INEOS TEAM UK tacked back onto starboard, Luna Rossa Prada Pirelli followed to maintain their cover and so the pattern continued to the top mark. Each time the Italians squeezed out more distance and rounded the first gate 30 seconds ahead.
After that the race was a one sided affair and as the breeze dropped the British team struggled to stay on the foils.
As Luna Rossa Prada Pirelli rounded the gate at the bottom of the course for their last beat to the shortened race, (finishing at the windward gate on leg 5), they were a full leg ahead of INEOS TEAM UK who remained stuck in the water, unable to fly.

By the finish the Italians who hadn’t experienced any flight problems were almost 2 legs ahead. 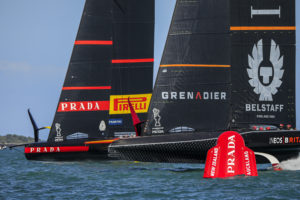 When the pair came back together, after the Kiwis had tacked onto port, the Americans used the starboard tactical advantage that they had to tack in front of Emirates Team New Zealand. Advantage American Magic.
Eventually the Kiwis tacked away, unable and unwilling to live in the dirty air of the Americans, who were able to continue to work the right hand side of the course handing them a slight further advantage but the margin was still slim.
Meanwhile, Emirates Team New Zealand fluffed a tack momentarily and splashed down, slowing them in the process, all of which helped to hand American Magic few more metres.

By the top gate on the first lap, American Magic took the right hand mark to lead Emirates Team New Zealand by 12 seconds.
But by the bottom mark Emirates Team New Zealand had hauled American Magic in to trail by just 3 seconds as they went through the leeward gate.
The big race changing moment was to come at the top of the second beat when the Americans fell off their foils through a tack and parked up just short of the windward gate. The mistake proved costly, handing the lead to the Kiwis who rounded the windward mark 54 seconds ahead.

From there Emirates Team New Zealand cruised to victory sailing the final lap unchallenged to win by 1min 19 seconds. 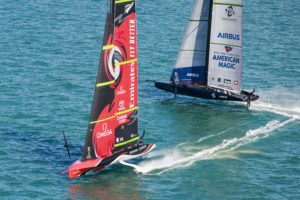 The problems started for INEOS TEAM UK (GBR) as they were dealt a penalty for an early entry into the start box, a blow that was to have implications later on.
From here there was little real engagement. Instead, there was a hint that New York Yacht Club American Magic were keen to take the match to INEOS TEAM UK as they set up to leeward as the pair crossed the start line on time and at speed.

American Magic got immediately the lead and continued to fly stretching their lead.

At the top of the first beat the Americans were a minute ahead as they passed through gate 1. Through the bottom gate little had changed and the physical distance between the pair was now around 800m.
Up the second beat American Magic slipped over the boundary and were dealt a penalty, they needed to give 50m away, a tiny amount given their lead, but an unforced error nonetheless.
Meanwhile, with the wind gradually dropping Sir Ben Ainslie team were struggling up the beat. By the time they had passed through gate 3 they were 3min 29sec behind.

As the breeze continued to drop even American Magic struggled to recover from a bad tack. But in this race they had a big safety margin and as INEOS TEAM UK went through the penultimate gate they were 5min 48 seconds. 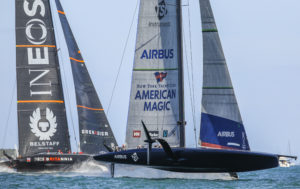 There was everything to play for in this last race and the show the teams put on didn’t disappoint.

At the start Luna Rossa Prada Pirelli showed their intent by performing a perfect port tack shortly after forcing Emirates Team New Zealand down into an area of the start zone nicknamed ‘coffin corner’ by the sailors. It certainly was for Peter Burling who was forced to follow the Italians lead who were already over 200m ahead.
By the first gate, Luna Rossa Prada Pirelli were ahead by 32seconds. But the margin was about to grow quickly as Emirates Team New Zealand pinched around the top mark and came off their foils in the process. Struggling to get back up to speed saw the margin grow to 800m.

Through the bottom gate Emirates Team New Zealand was clearly in the lead. The race had been shortened but there was still another lap to go – every reason for the Italians to keep the pressure on.
Minutes later Emirates Team New Zealand performed a poor tack and fell off their foils, slowed down allowing Luna Rossa Prada Pirelli to haul back up into contention. With just metres between them the race was back on. Staying on the foils would be a crucial factor that was now influencing the teams’ tactics. Locking horns was now secondary to steady flight.

By the last gate rounding there was 18seconds between the pair as Emirates Team New Zealand headed down the right and Luna Rossa Prada Pirelli down the left.
The difficulty in pulling off clean gybes was clear to see, at one point the margin had grown to over 300m. But by the finish it was the Kiwis that had held their lead to finish 16 seconds ahead of the Italians and in doing so, win the PRADA America’s Cup World Series.
“We were pretty nervous when the breeze dropped into the 6 knot region and we fell off the foils,” said Emirates Team New Zealand’s flight controller Blair Tuke, “but it’s been an epic day’s racing.” 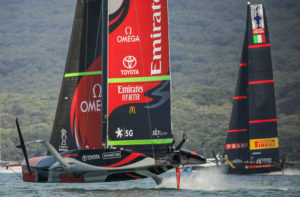