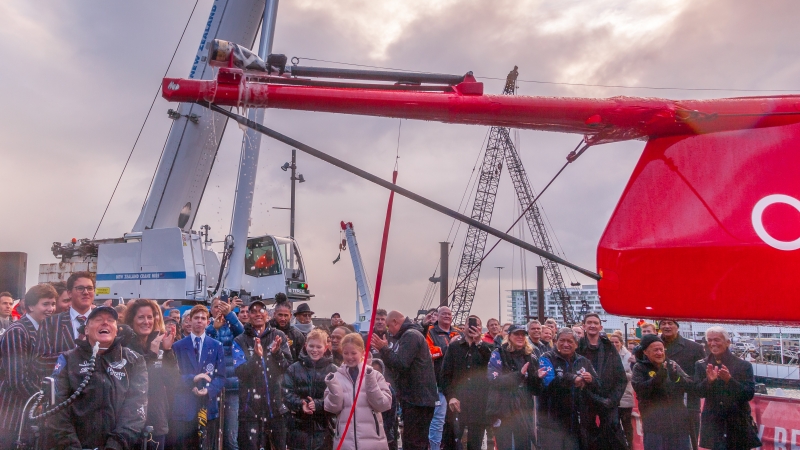 Emirates Team New Zealand christened their first AC75 at their team base in the heart of the America’s Cup village in Auckland today. The significant milestone was celebrated with the team, their families, sponsors and suppliers. The boat was christened “Te Aihe” (Dolphin) by Marcus Gerbich – member of the MND Foundation – and blessed by Ngati Whatua.

Emirates Team New Zealand COO Kevin Shoebridge, who has overseen the development and launch of plenty of boats over the years, was especially proud to be witnessing the Kiwi AC75 emerge for the first time.

“This is a significant occasion for the team, not just because it is another new boat, but really because when we won the America’s Cup in 2017 we very quickly had to come up with a new concept of boat that would really continue to push the boundaries of innovation and technology in the America’s Cup. So in the relatively short timeframe since November in 2017 when we published the concept, to seeing it in the flesh today is an amazing testament to the entire team willing to push things all the way from concept to design to build and fit out” said Shoebridge.

It has taken over 100,000 man-hours to design and build the boat with a group of about 65 people between designers and boat builders who have been working quietly throughout the past year. Sean Regan  has led the set up of the team’s bespoke production facility on Auckland’s North Shore from a blank factory floor to producing the first AC75.

“We have had the pressure on since the moment we decided to establish our own production facility very early on in this campaign. We have built up a really great team of 42 fully committed people at the yard who have been working full-on to get this boat out the door,” said Regan.

“Even for the most experienced boat builders on the team, this has been a very unique build because it is such a sophisticated boat. But it is really encouraging that for a number of our junior and apprentice boat builders their first build has been on a boat that is really on the cutting edge of complexity in build, design and performance.”

“There’s a huge amount of innovation in the design and build of the AC75 – more than we saw in the AC50’s in Bermuda” said Bernasconi. “The AC75 is a completely new concept and has presented plenty of challenges across many areas – but this is precisely what the Rule was designed to do – to push development to the extreme. We haven’t been conservative in any aspect of our design; it’s not long until we need to commit to the design of our second boat, which we will ultimately race in the 2021 America’s Cup, so we need to test as many of our ideas as possible in the yacht we’re launching today.” Unlike the other main Challengers, Emirates Team New Zealand has focused the development of their first boat entirely with their in-house simulator as opposed to building a smaller scale test boat to validate concepts on the water. So once the AC75 goes for its maiden sail, it will be the first time the team has collectively sailed since winning the America’s Cup on June 26th 2017.

“It won’t be without nerves the first time we go sailing, but I am sure that is no different for all of the teams.” said Glenn Ashby

“The AC75’s are big powerful and fast boats so they will be a handful, but from our understanding through our simulations they are inherently a safer boat to sail than what we have sailed in the past two America’s Cups. As with any new boat it is all about slowly getting it up to speed, learning how to sail it most efficiently, pushing the development of the designs and then putting in the hours in getting ready to race for the ACWS Sardinia in April 2020.”

Emirates Team New Zealand will now focus on a busy period of testing on Auckland’s Hauraki Gulf over the spring and summer months having the advantage of developing and training on the race area of the America’s Cup Match which will be raced in March 2021.

Emirates Team New Zealand CEO Grant Dalton concluded: “I wish to thank every single team member for the hard work they’ve done to get us to this day. A special thanks also to all our sponsors and partners for all of their valued support so far and everything they will continue to do during our journey towards the America’s Cup Match in 2021. It is an exciting time, but things are about to get a whole lot more so from now.” 38 Grand Sport, 103 knots in total comfort: a new era is about to dawn Previous post