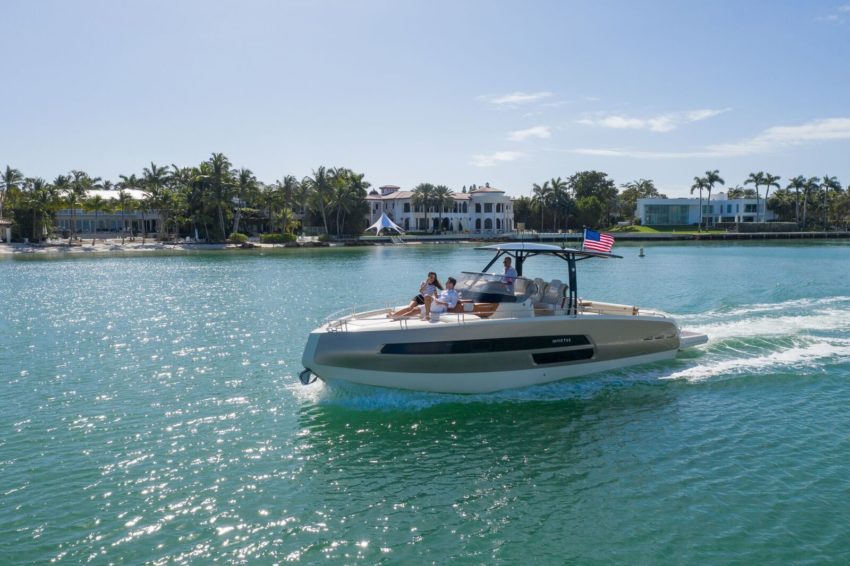 alberto.morici27 February 2020Comments Off on Invictus Yacht USA made its debut at the 2020 Miami Yacht Show with the GT 3701532 Invictus Yacht appeared on the European market in 2016. Since then, their activities have firmly established their image, which has always been a distinguishing trait of the Italian shipyard: great variety of features, considerable attention to detail, ever original style, strong character that always delivers elegance. The boats designed by Christian Grande have won Italian and international awards thanks to their Made in Italy aesthetics and traits. In 2019 – without any existing distribution network – the first units were sold in the US.

2020 is the right time to plan a dedicated marketing program in the US. The decision to expand across the Atlantic is fueled by a desire to improve and to gain creative and organizational tips from a new audience rather than by a specific need. Thanks to its current productive and financial position, the Italian shipyard is uniquely positioned to successfully enter a market that has repeatedly proven to be very receptive to the qualities and values embodied by the crossed shield trademark. The expansion in the American market is managed by a dedicated department, Invictus Yacht USA, which imports the models and develops a dealers’ network of excellence. The starting point has been Florida and the East Coast, expanding to the West Coast and gradually including markets in central and south America as well.

The Miami Yacht Show 2020 has been an opportunity for the Italian shipyard to make its debut in US boat shows. Invictus Yacht exhibited the GT 370, equipped with two petrol-powered sterndrive Volvo Penta engines (430 hp each), in the most iconic color of the Invictus Yacht range, Vanilla Sea, combined with Cognac cushions. The characteristic reverse bow, the lateral windows integrated into the hull and the widespread quality detailing that is typical of the brand take on a new dimension with the GT 370 and are dedicated to the owners who want to take the next step up in the world of Invictus yachts.

Ever more spacious and comfortable she hosts two large cabins belowdecks that can be personalized based on the needs of the owner: the ample stern cabin comes with two single beds that can be brought together as one, hosting three children or two adults with comfort to spare; the bow cabin can be set up with a third berth or, if the owner so chooses, with a long settee and matching table to one side, with a corner bar and television, creating a comfortable and scenographic living area.

This dual configuration was conceived to satisfy the widest target possible, including the elite Invictus target, and reminds us that the vessel can be used as a mega-yacht tender, or for luxurious waterfront villas or for short cruises, guaranteeing the owner the most space possible, especially when comparing the GT to other offerings in the same market segment. The single lateral windows are unique, not only for their increased size, but also for their dual level and for the noteworthy material nature of the inset, enhancing the Invictus tradition of elegant shapes sculpted right into the material. As mentioned, the larger size has allowed more freedom to design the deck layout and equipment: the helm and navigation station, fitted out with three oversized and enveloping chairs for the driver’s comfort and two others, just to begin with. Of special interest is the opening side platform to port that not only increases the vessel’s fascination and available space, but actually increases freedom of movement and the facilitates cockpit use when on board.

An interesting feature is the submersible stern deck, unheard of before for this size and type of vessel, a sure advantage in flexibility and enjoyment while using the yacht. The rich detailing and assortment of standard accessories doesn’t end here, but also includes a mobile bar incorporated in the stern settees that holds a compact kitchen with sink, refrigerator, ice-maker and special lockers. The central area of the deck evolves around an extendable table, closely integrated with an ample “L” shaped sofa with fully reclining backrests that transform the entire area into a huge cushioned sunbathing zone. The “L” shaped sofa is part of the starboard bulkhead and opens to its left to let you fully appreciate the view of the sea through the opening made by lowering the optional side platform.

All the furnishings and upholstery are obviously in state of the art materials with the latest styling, enriched by special quality leathers and made even more precious thanks to the chromed stainless steel trim covered with special leather that not only underlines the Invictus heritage but adds value to the whole and increases the aesthetic beauty and usefulness of the living spaces.

The TT series will be marketed shortly after the GT range (exhibited in Miami), starting from the TT280 and ending with the newest 460 model, which is close to its debut.