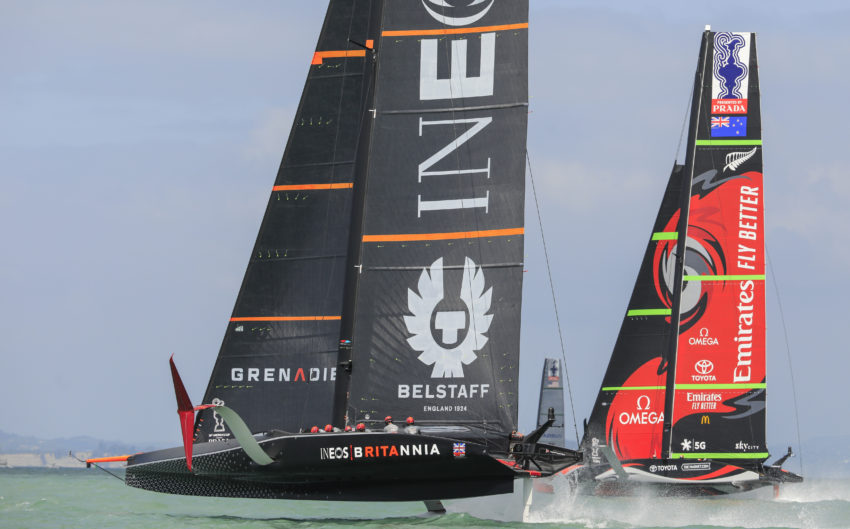 Another great days of racing and the news is that match racing is still exist!

After an unconventional pre-start in which Luna Rossa Prada Pirelli (ITA) were dealt a penalty for entering the start box early. They managed to clear this with a couple of tacks, but the real drama was to happen just a few minutes up the first leg.

Having kept their noses clean and pulled out the makings of a good lead, American Magic (USA) came close to a capsize during a tack when the windward foil seemed to be slow in being raised out of the water. The incident looked precariously close to a capsize but what wasn’t in doubt was how it had affected their standings in the race as the Challenger of Record took the lead.

At the first windward gate the Italians had maintained healthy lead but two gybes at the bottom of the downwind leg cost them distance and the Americans were now just 9 seconds behind.

From there, the race remained tight but Luna Rossa Prada Pirelli sailed a confident and clean race to take the win by 12 seconds. 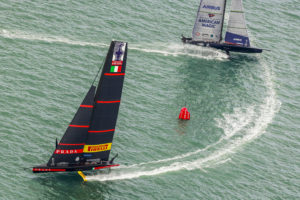 There were early signs of some boat on boat action in the pre-start as INEOS TEAM UK (GBR) attempted to pin a penalty on Emirates Team New Zealand (NZL) seconds before the start. The move didn’t work, despite a protest by the British team, but it provided a burst of action in the opening stages of this race.

The breeze had shifted to the left forcing both boats to start on port tack and resulting in a drag race up the first part of the beat.

The Kiwis were first out to the righthand boundary and came back at INEOS TEAM UK as they tacked onto starboard. Sir Ben Ainslie matched the tack, well to leeward and with a decent lateral separation between the two there was little in the way of engagement and more in the way of covering tacks. But just as Emirates Team New Zealand were settling into the makings of a healthy lead, drama as the home team came perilously close to hitting the glass fibre 900kg windward mark in a mis-communication between helmsman Peter Burling and tactician Glenn Ashby who was positioned to leeward and talking him into the rounding.

Meanwhile, INEOS TEAM UK took the left-hand mark and rounded cleanly to trail by 20 sec. By the bottom mark the Kiwis lead had increased to 30 sec.

On the next lap, the drama came when Emirates Team New Zealand fluffed a gybe in their approach to the bottom gate as the rudder appeared to stall. The boat performed a high-speed wheelie. Smart thinking by the crew saw the jib eased quickly and the windward foil raised as Burling headed downwind to avoid a capsize. They managed to recover and rounded the mark cleanly, but it had cost them 5 sec shaving their lead from 45 to 40 seconds.

The third and final lap delivered no more in the way of dramas and saw the Kiwis extend their lead to 1:32 by the finish. 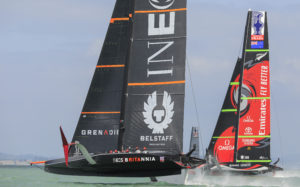 The return match between American Magic (USA) and Luna Rossa Prada Pirelli (ITA) was the third race of the day. The breeze had shifted further to the left and the course had been adjusted to match with four laps.

On the entry into the start box, Luna Rossa Prada Pirelli came in early and were dealt a penalty. Two starts, two penalties so far, but there was more to come.

Then some classic match racing action as the boats duelled to the righthand side of the start area which saw Luna Rossa Prada Pirelli put a penalty on American Magic. But in the heat of the moment the Italians were unable to accelerate away from the issue and the Americans put a penalty back on Luna Rossa Prada Pirelli. To be stopped in the water with your American opponent screeching away means that it doesn’t take long to give the 50m distance that is required to clear a penalty.

As the race settled down, American Magic were leading and headed out towards the left hand side of the course.

By the time they reached the windward gate it was clear that they had chosen the better side of the course and rounded 21 seconds ahead of the Ialians.

Little had changed in the distance between the two by the first leeward gate with both boats taking the left hand mark, 20 seconds apart. On the water the distance was around 140m.

This time American Magic seemed more keen to cover their opponent, matching them tack for tack to protect their lead, with good reason.

At the second windward gate Luna Rossa Prada Pirelli had cut the deficit in two to round 10seconds behind.

By the bottom of the downwind leg the distance had increased a little to 14 seconds as the Italians performed a perfectly executed starboard mark rounding that rolled into a tack as if they were on rails.

A pattern in the tactics was appearing too with another very similar pattern of play on the final upwind leg as American Magic matched Luna Rossa Prada Pirelli tack for tack to protect their lead. And this time, protect it they did as the Americans rounded the windward mark for the final time, 16 seconds ahead.

With the finish line in sight and confidence high American Magic cruised to victory, stretching their lead to 30seconds. 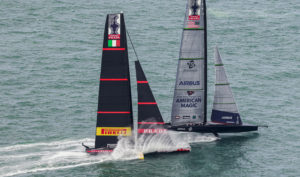 The final race of the day saw the second helping of the day’s sparring between INEOS Team UK (GBR) and Emirates Team New Zealand (NZL). While there was little engagement between the two in the pre-start, Sir Ben Ainslie made a better job of setting up to cross the start line on time and at speed.

Meanwhile, the Kiwis who were already rather deep into the starting box, appeared to stall out in a pre-start gybe. The result was that Emirates Team New Zealand were not going to be able to make the start on time, leaving the door open for INEOS TEAM UK to sail away unhindered up the first beat.

The Brits rounded the left hand mark of the first windward gate in the lead, but Emirates Team New Zealand had already hauled back a big chunk of the lost distance to round just 12 seconds behind. The Kiwis chose the right hand mark resulting in a split from their opponents. When they came back together to cross, Emirates Team New Zealand had taken the lead, at least for the time being. The shifty and puffy breeze had favoured the British route down the right hand side of the course and placed them back in the lead at the next cross.

Then, as the third cross approached as the pair came into the bottom gate the lead had now swung back to Emirates Team New Zealand as they rounded the left hand mark, 4 seconds ahead of INEOS TEAM UK who chose the opposite mark.

By the top gate on the second lap the Kiwis leading margin had increased to 31 seconds, despite INEOS TEAM UK appearing to match Emirates Team New Zealand’s straight line speed. By the bottom the Peter Burling’s team lead was 47 seconds.

With just one lap left, the breeze had dropped a few knots making it more of a struggle for the teams to keep their boats on the foils. Mark roundings became more tricky as their approaches into manoeuvres were adapted with the occasional momentary splash downs through tacks.

By the final leg the die had been cast and the Kiwis took a win over the British team by 1min 42 secs. Another win for the home team, but two completed races for Sir Ben Ainslie after some difficult days. 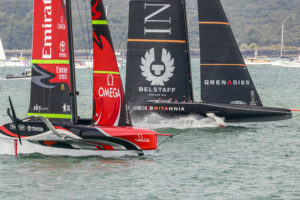