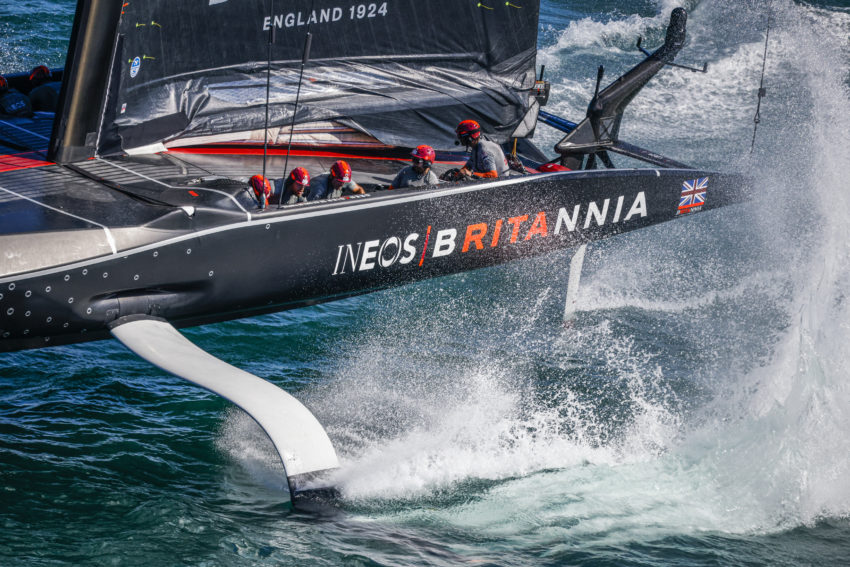 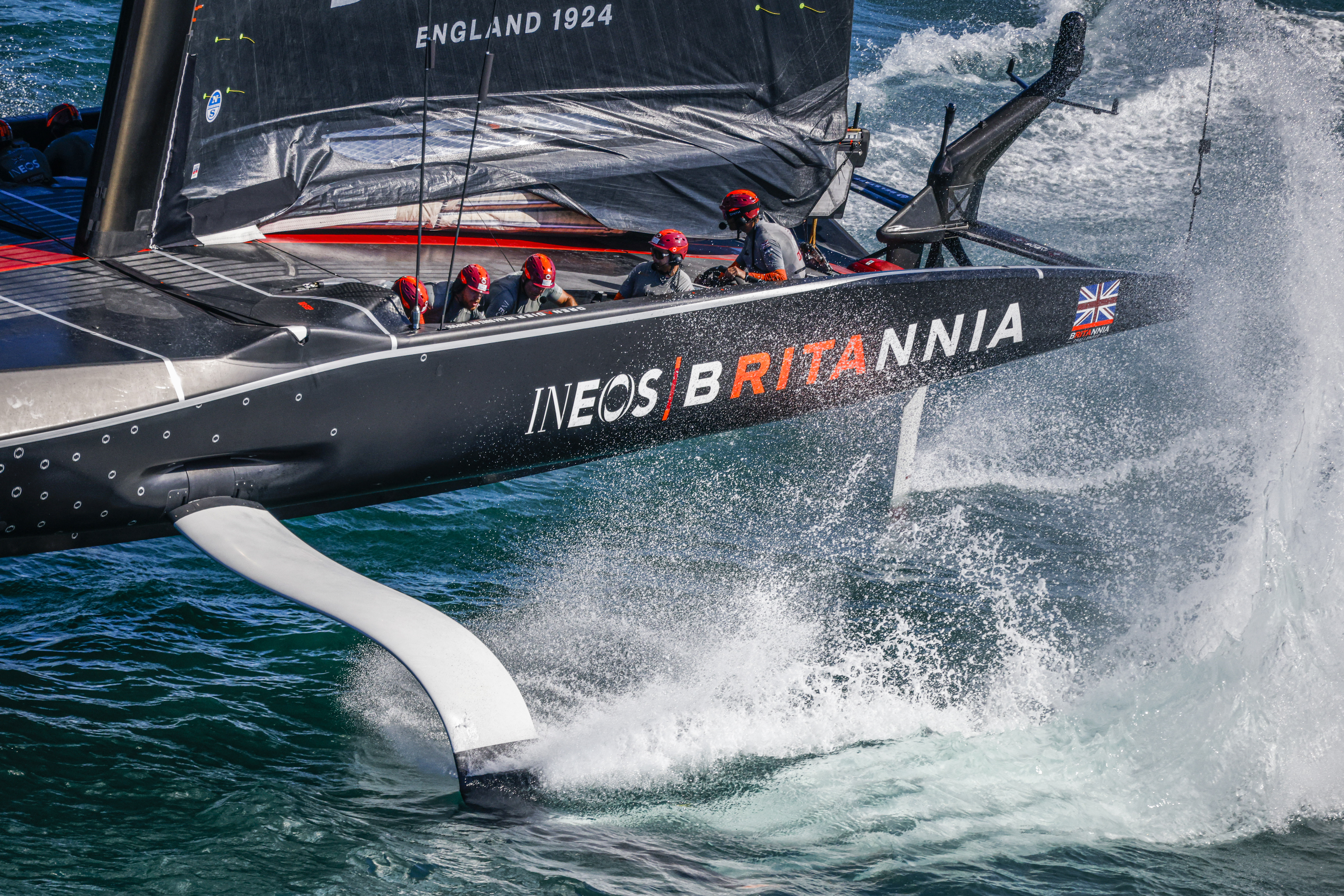 The PRADA Cup Final is not done and dusted yet, with INEOS TEAM UK marking their first point on the scoreboard, there may still a long way to go. In the first race of the day, Luna Rossa Prada Pirelli resumed racing where it was left last weekend, getting their nose in front at the start and kept the British in their wake to claim a vital fifth point. However in the second race Ben Ainsie got his hands on the textbook finally and executed the same game plan to take a convincing first point. Two more wins is all will take for the Italians to take the PRADA Cup, but the British team will not give up without a fight. With the teams having pretty even boat speeds the pre-start became the key moment of the whole race, start ahead and most likely will finish ahead.

Any nervousness that the sea breeze would struggle to develop was dispensed with well before the start with 8-10 knots sweeping across the course area from the south west. In the pre-race preparations, both teams were foiling comfortably around the race course area, the day was on.
Coming into the pre-start duel Luna Rossa Prada Pirelli came in from the right, crossing INEOS TEAM UK who entered on starboard, but would either team risk close engagement and risk coming off their foils?

The opening seconds of the pre-start suggested not as the pair kept their distance but then, as the clock counted down to the start both clearly wanted the right hand end of the start line.

The British were to windward, a commanding position as they swooped down towards Luna Rossa in the closing seconds. But the Italians had managed their final run into the line perfectly and were able to force the British to alter course and keep clear at a crucial stage in the countdown.

The jury delivered a penalty to the British but both boats were early across the line, the penalites scrubbed each other out. But in the coming together of the two boats INEOS TEAM UK were deemed to have infringed the boundary around Luna Rossa and were given a penalty. But the story wasn’t over yet.
The pair had split tacks and when INEOS TEAM UK and Luna Rossa came back together for the first time Luna Rossa claimed that the British had gained an advantage from their position. The jury agreed and gave INEOS TEAM UK a second penalty. Now the British had to give away distance to clear it but that proved difficult.

INEOS TEAM UK had got to the better side of the course and kept benefitting from their position making it difficult to scrub off the distance and clear their penalty. By the time they had, Luna Rossa was in the lead.

By Gate 1 it was Luna Rossa that were through first, rounding the right hand mark 15 seconds ahead. On the downwind leg there were few passing lanes, but INEOS TEAM UK were able to sail slightly deeper to reel in some distance on Luna Rossa taking the advantage from 220 m to 160 m. But their gain was short lived.

As the race played out the Italians sailed a perfectly executed race aboard a boat that appears to have an extra gear when it comes to the angles that it can sail upwind. As each lap went by the Italian advantage grew and by the finish Luna Rossa Prada Pirelli crossed 1 min 20 sec ahead. 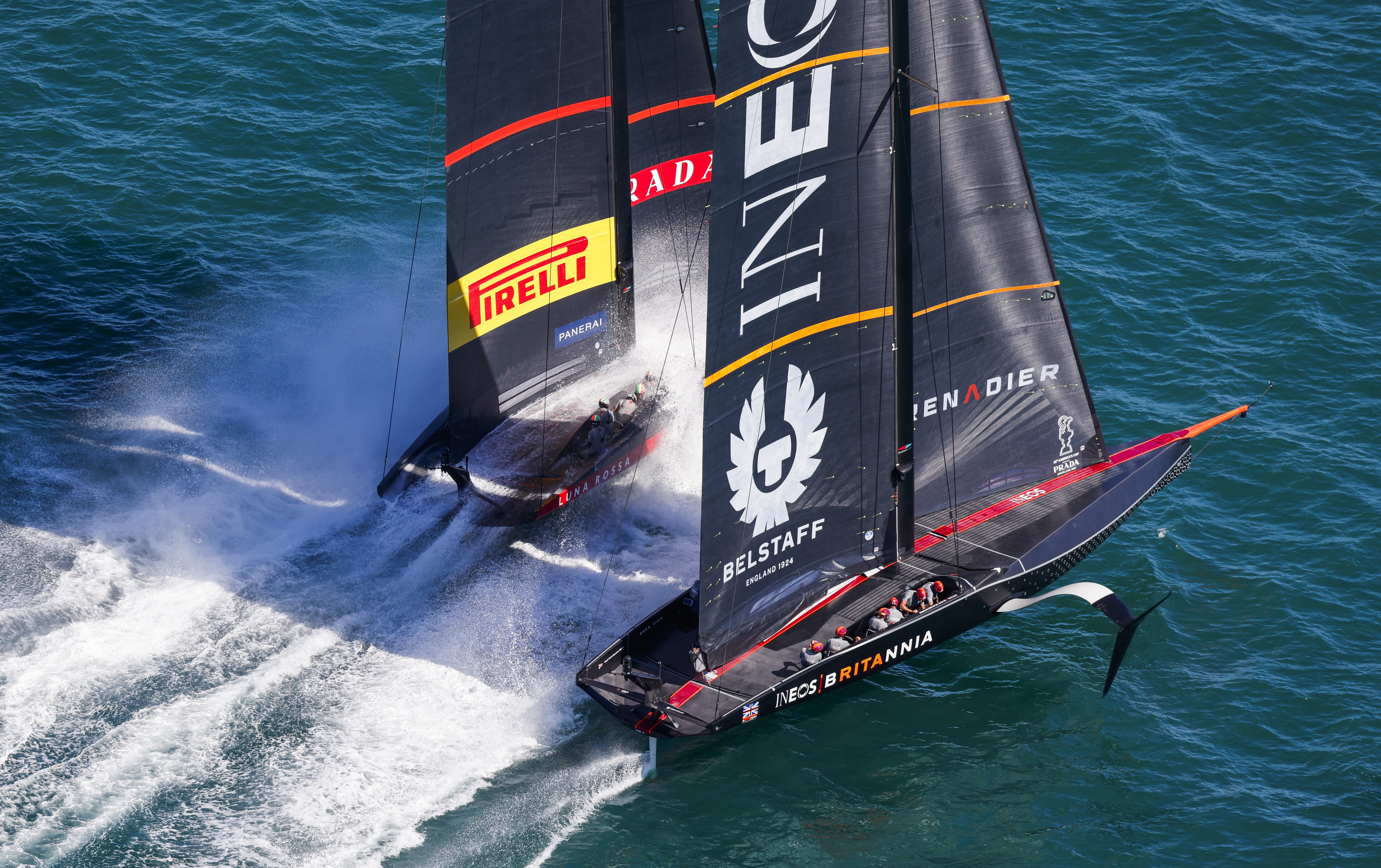 QUOTES FROM THE RACECOURSE

“It has been a fantastic race. Jimmy did most of the job in the pre-start working very well the time on distance. The whole team is playing well, the boat is in good shape, we have to keep doing our job and think race by race. At the start there is a very fine line between staying high and slow and staying too high and too slow, and the latter is when you fall off the foils. We did a good job and Jimmy really kept the boat on the edge.”

“We are just going to keep plugging away; it’s tough and obviously we are struggling in terms of straight lines performance, we have to push harder to make something happened. It was a pretty close start, we got the first cross but they were just sailing away with their actual speed up wind. On the start we wanted the right hand side for the pressure so knowing they were putting off the pace on a straight line performance, it was worth it taking the risk. I would do the same thing again.”

For the second race of the day the breeze had increased slightly. INEOS TEAM UK were first into the pre-start zone and were able to control the start more readily. Two small advantages, but would the British team be able to convert these into an advantage at the start?

As Luna Rossa came back on starboard INEOS TEAM UK were ahead on port but chose to tack onto starboard underneath them to bounce off the Italians, a classic lee bow tack.
As they approached the top gate for the first time the pair were now separated across the width of the course and it was INEOS TEAM UK that had gained, the distance between them around 50 m.

And when they crossed, INEOS TEAM UK were laying the right hand mark of gate 1 and rounded 8 seconds ahead of the Luna Rossa – the first time they had been ahead since the PRADA Cup Final had begun.

On the downwind slide the British were now 150 m ahead. Halfway down the leg the margin had grown to 200 m. By the bottom gate they rounded 21 secs ahead.
INEOS TEAM UK were now starting to change their tactical play by defending their position. Luna Rossa knew it and were tacking frequently in an attempt to force INEOS to do so in the hope that the British would lose some of their distance.
Meanwhile, the sea breeze was climbing slowly but steadily with an average just breaking through 10 knots.

At gate 3 both boats took the left hand mark, INEOS TEAM UK led by 18 seconds, Luna Rossa had clawed back three seconds, but their gain was short lived as INEOS TEAM UK opened up their lead to 430 m on the water and it continued to grow. Through gate 4 the British were now 32 secs ahead with one lap to go.
But this race was far from over. A shift in the breeze and a drop in its strength allowed Luna Rossa to make gains on the final upwind leg. INEOS TEAM UK were back under pressure.

Through the final gate INEOS TEAM UK took the right hand mark, Luna Rossa the left and the distance between them was now just 9secs. Now it was a drag race to the finish, the British needed to defend their position as Luna Rossa attacked. 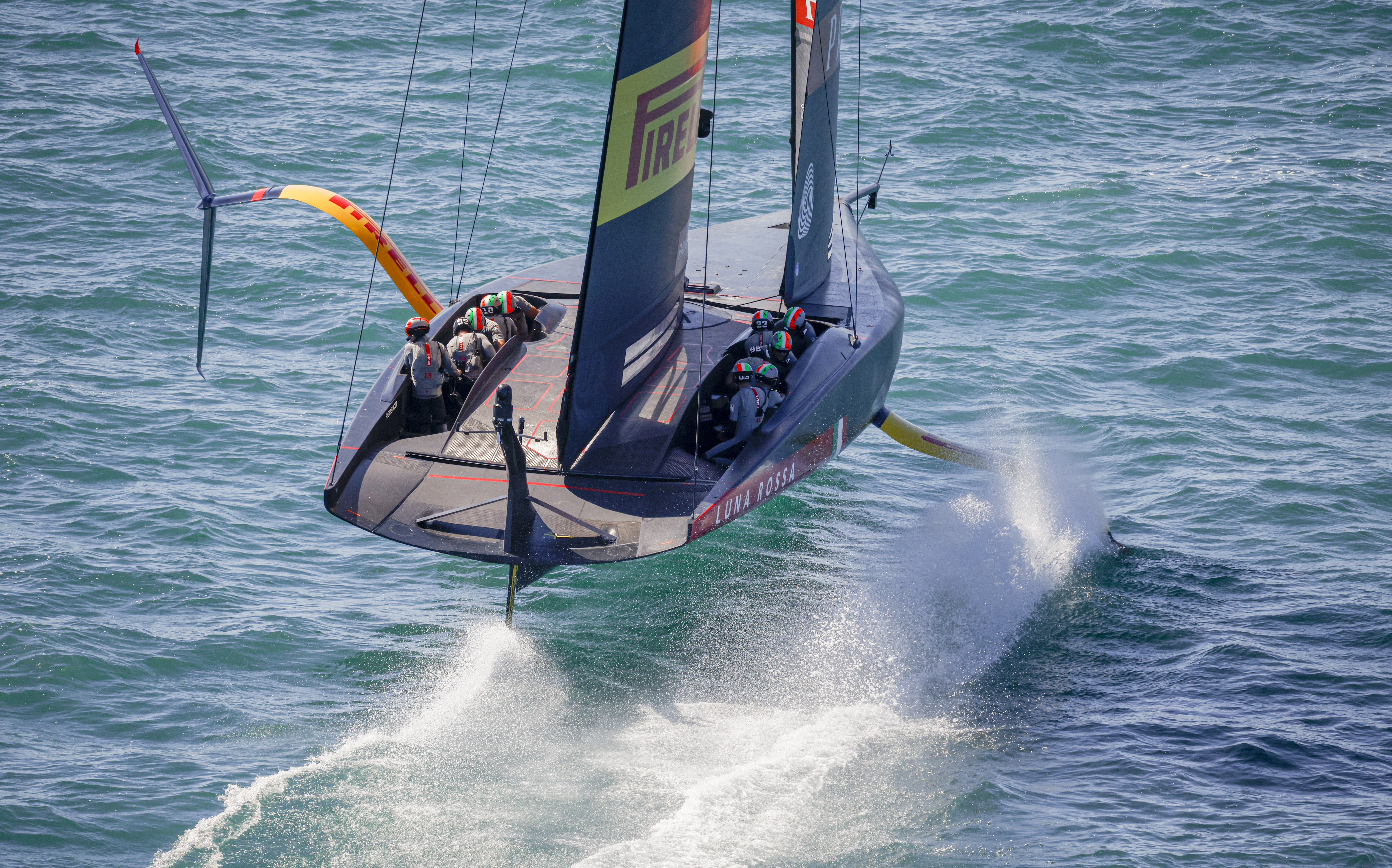 QUOTES FROM THE RACECOURSE

“The day has shown the boats are very similar. INEOS TEAM UK sailed a great race, but there was not a whole of opportunities, it was one of those races where the lead boat is always able to stretch a little. At the starting line it’s full coordination, the entire team has to be on the same page. It is very difficult to sail these boats perfectly; there is never a day when you go out and be 100%. We surely have few things from both race that we will be reviewing and we will come back tomorrow stronger.”

“We are very happy with the win, we have been on the wrong side on the last few days. The team did a great job, they just don’t give up they are going to keep fighting all the way, so we got one back, we needed it. I think seems to be that on 13 knots and above the boats are pretty even, but beneath that we struggle, they know and we know, that is the challenge. I can’t say enough about the team, they have been great. When the wind dies down it’s a tricky situation, Giles did a great job there, we were concerned we might be losing in there.”