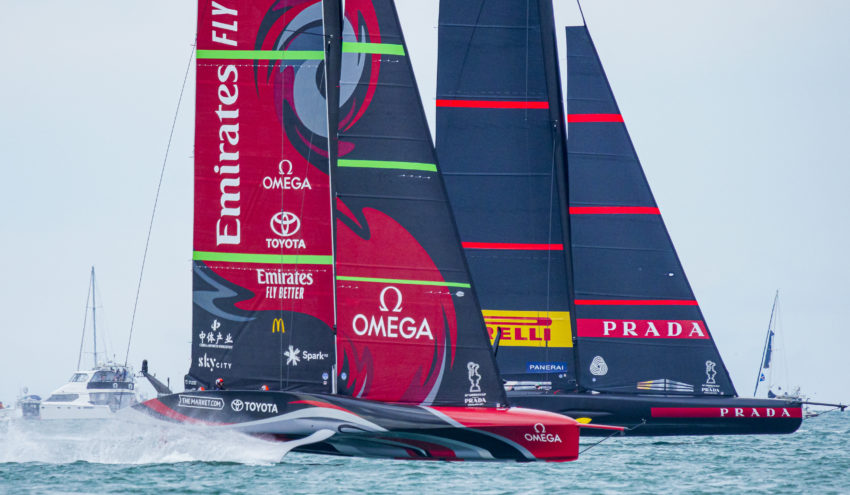 It is impossible to exaggerate the importance and significance of the of the first race in any America’s Cup as the anticipation and build up that proceeds the first day is beyond anything else in sport. Day one of the 36th America’s Cup presented by PRADA didn’t disappoint with the Defender Emirates Team New Zealand and the Challenger Luna Rossa Prada Pirelli sitting on a tie after two races. Pretty even performances between the two boats once again confirmed that there is no space for mistakes.

Today’s results clearly show that there is a long way to go in this first to 7 points America’s Cup Match. As 170 years of history taught us, the game is far from over. 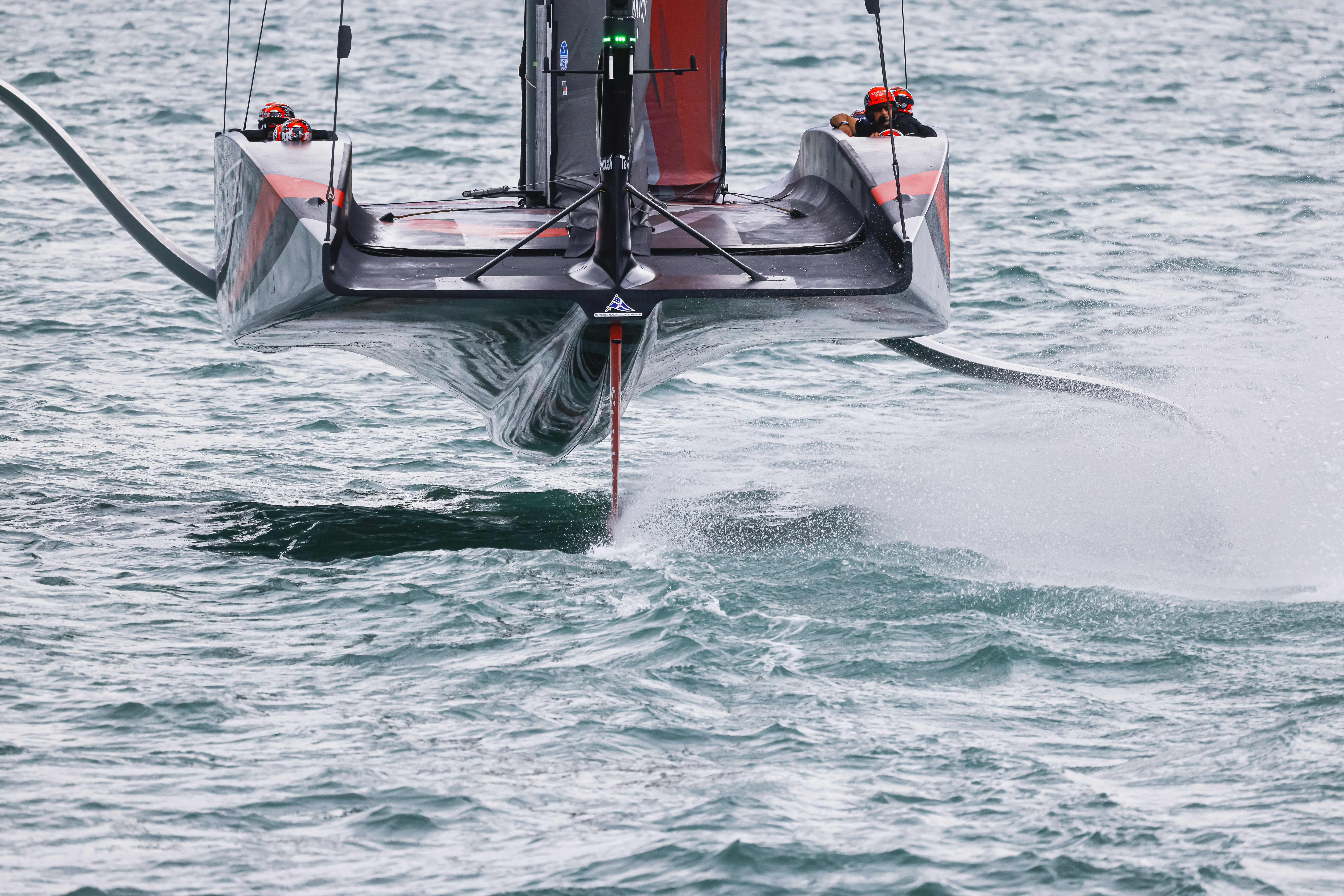 As the clock counted down during the last few minutes before the start of the 36th America’s Cup presented by PRADA the wind speed had settled at 10 to 12kts. One of the pre-start variables was established.

Emirates Team New Zealand entered from the left-hand side on port tack heading into the pre-start zone at 44 knots. As they crossed the bow of Luna Rossa Prada Pirelli with distance to spare, both boats headed deep into the zone. As they moved towards the right-hand corner and gybed to head deeper the pair prepared to lock horns. But as both headed back towards the start line, judging the time on distance for the return was crucial. Both appeared to be early as Emirates Team New Zealand switched to take the windward position as each headed up to slow down. Neither came off their foils but these were precious seconds for both as they tried to kill time. Luna Rossa’s co-helm Jimmy Spithill forced the Kiwis who were to windward up further as he tried to control the line up.
But as both crossed the line the defenders had a slight advantage sitting to windward and looking to overhaul the challengers.

In an attempt to prevent the Kiwis from rolling over their breeze and Luna Rossa tried to luff the Kiwis and pressed the button for a protest, complaining that Emirates Team New Zealand had not kept clear. From the air it looked like a desperate attempt to prevent the inevitable. The umpires took the same view and refused to award a penalty.
The move had been an Italian gamble that hadn’t paid off and had slowed them up in the process, delivering the advantage to Emirates Team New Zealand.

From there, the home team kept their lead throughout the three lap race and while the distance between them ebbed and flowed with each leg and never got larger than 23 seconds, Luna Rossa were unable to make a big enough impression on the Kiwi lead.
After 23 minutes of racing Emirates Team New Zealand took the first win of the 36th America’s Cup in a race that was defined by the first few seconds off the start 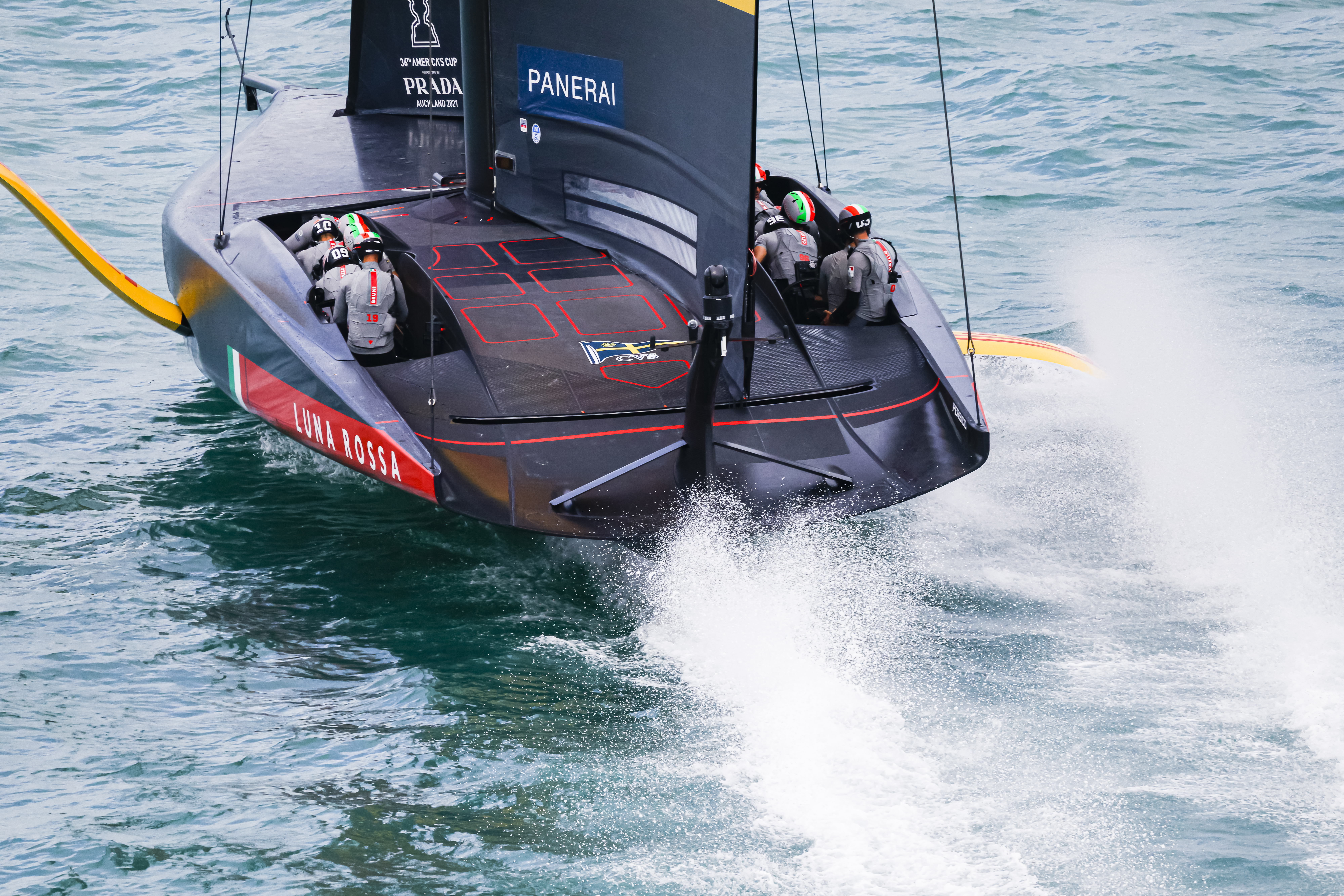 As both boats came into the start zone the breeze had increased a notch and was now sitting at 13kts.
The entries were now reversed from the previous race, Luna Rossa Prada Pirelli came in from the left on port, with Emirates Team New Zealand entering from the right.

Once again both headed out towards the right-hand side of the pre-start area, but this time Team New Zealand tacked around while the Italians gybed. When the Kiwis came down from above to engage with the Italians they were a little slow to do so and ended up trailing. The result was that the early advantage went to the Italians forcing the Kiwis to tack onto port at the start in order to try and escape the clutches of their opponents.

But co-helmsmen Jimmy Spithill and Francesco Bruni had anticipated this and tacked quickly to cover.
As the pair headed out to the right and the next tack ensued, Luna Rossa delivered a similar defensive move, tacking on the bow of Team New Zealand and sailing as high as possible to prevent the Kiwis from coming through. The tactic was working but the margin remained small.
On the next tack back onto port, Luna Rossa Prada Pirelli were to windward but Emirates Team New Zealand had clear wind to leeward. Was this their opportunity to put their foot down and slide through to leeward?
It might have been an opportunity, but Peter Burling and Co were unable to exploit it.

Another tack back onto starboard and the Italian defensive position returned.
By gate 1 the Italians had managed to pull a 13 second lead over the Kiwis as both boats rounded the right-hand mark of the gate.
From there little changed on the first downwind leg which was a drag race to gate 2, the Kiwis taking back a single second to round 12seconds behind.
Halfway up the second beat, the Italians benefitted from picking the better side of the course and extended their lead to 250m on the water. Yet despite the physical distance between the two, the Italians continued to cover their opponents.
By gate 3 Luna Rossa Prada Pirelli had extended their lead to 25 seconds as they rounded the left-hand mark of the gate, accelerating to 49.8kts as they did so.
An indication of how hard the Kiwis were chasing came as they turned the same mark hitting 51knots as they did so. On the water the distance between the pair was now 430m.

As the Italians prepared to round the left-hand mark of gate 4 they dropped their starboard foil, the first indication that they wanted to pull off a high speed tack out of the rounding. They did and indeed it was perfect.
But heading for the right hand side of the course cost them distance on the Kiwis who rounded the same left hand mark but headed out to the left. By the time the pair came back together the margin had decreased significantly and by gate 5 the time between them was just 12 seconds, down from 24.

On the last downwind leg to the finish the tension built as the Kiwis brought some breeze with them and pulled back a few more seconds.
By the finish it was close, just 7 seconds. But a win is a win, whatever the margin. The Italians had put their first point on the board, the scores were now even.
So, for those looking for a clear indication as to who has the upper hand in the 36th America’s Cup, the opening day delivered no guide. Instead, it had proved just how closely matched these two teams are and how the Cup looks unlikely to be a walkover, for either team. 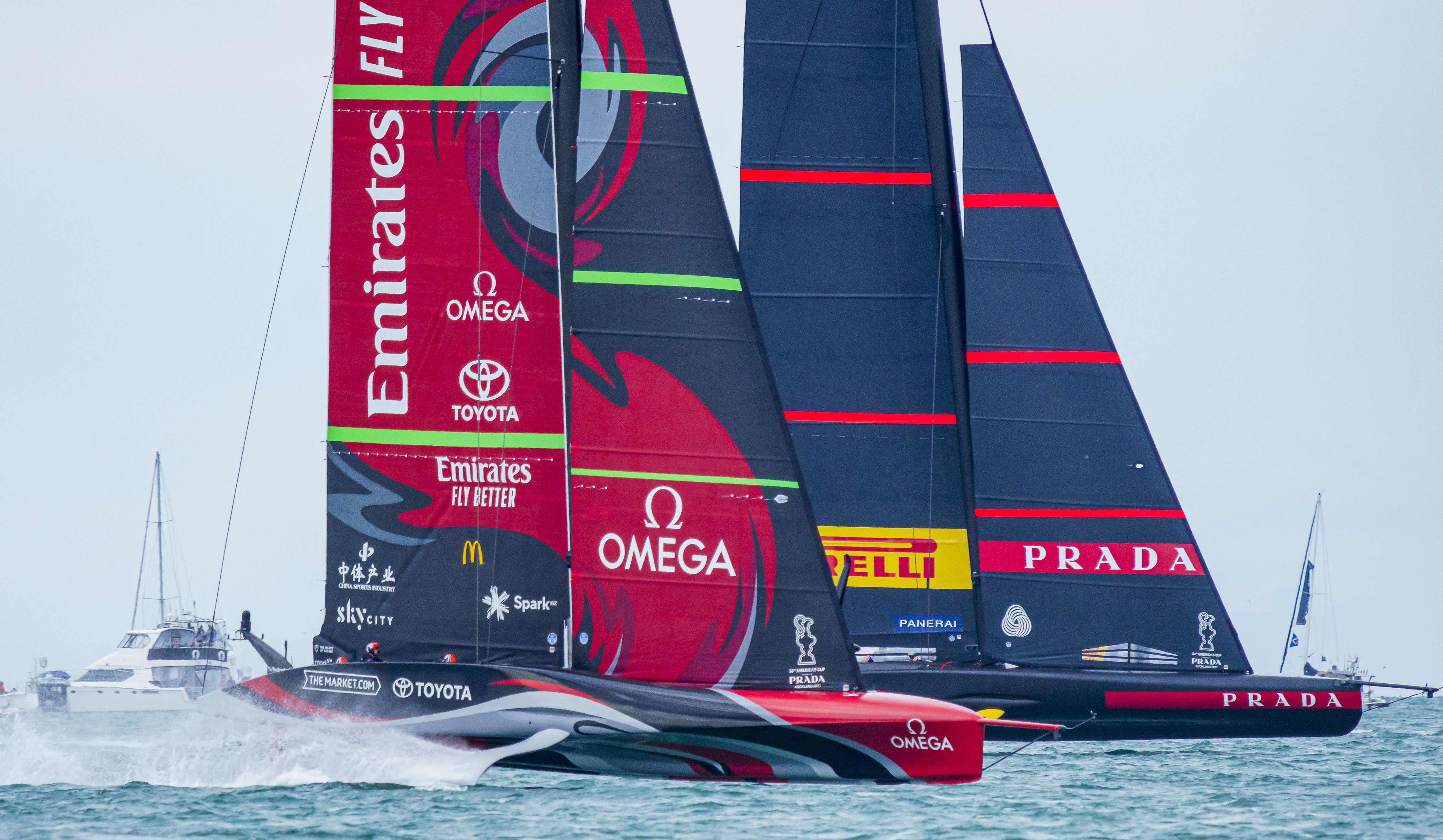